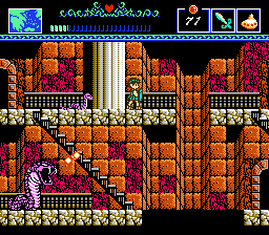 ​
+
Good variation (at first)
Fast dialogue
Some fun weapons and abilities (sandals/anti-grav shoes - high jump+walk on ceilings (later used in Metal Storm), fire staff - ricochets off some surfaces and moves along the ground for a bit like the holy water in CV+works like a torch for dark rooms, shoot with your sword like in Zelda however here it drains your health until you also get a bracelet)
Shops (rare and they're more like trade points with only one choice)
Better dialogue and graphics than in Zelda 2
Pretty well made mythological Greek theme
Some nice touches like kneeling before gods and the music changing when starting to climb the mountains
Some hidden items (water flask - health refill, level up item in forest)
Ride a dolphin to travel the seas
Fast travel by Pegasus (have to memorize the paths though and it doesn't loop ie the route stops back in Arcadia plus the destinations aren't placed at warp points)
Unlimited continues (lose half your money and respawn at beginning of area when dying)
Fountains for restoring health and refilling your flask (there's usually one fountain per dungeon)
Some mini-bosses, Some decent bosses (cyclops, minotaur, cerberus - regrows its other head unless killed quickly)
Does an OK job at easing the player into its world (NPCs warn of harder areas, plenty of clues, easy enemies that drop health)
Pretty nice ending cutscene for the time

+/-
AP and HP upgrades via bought items here (ambrosia, generally have to find the shops in hostile areas; as opposed to leveling like in Zelda 2)
Partially non-linear structure (can go to argolis before attica though it's quite tough, can't go to phrygia before the forest since you can't open the hidden door in the first boss's cave without first getting the item to reveal it, can go to phrygia or phthia in either order before crete though the former is pretty tough)
Some backtracking with ability gating to progress (forest)
Password saves (long)
Toccata by Bach plays in temples
Palette swaps on Gods and bosses
The fire shield isn't very useful
The final battle is pretty much the same as in Zelda II
Lacks puzzles
Odd how the early-game is harder than the mid-game (no fountains in some dungeons/hostile areas, low health, some tough enemies)
No HP refill after a boss
Many death pits
Can't shoot with the sword while crouching
Hit detection when attacking is unforgiving in that you can't stand too close
Enemy patterns are similar to but don't reach the complexity of some of the enemies in Zelda 2, boss gauntlet in the final dungeon however if you take the right path you can skip all but one of them

-
No real map system (you just get a vague idea of where you are in the world from the mini-map roughly showing your location on the zoomed out world map; fourth area (forest is a pretty big maze and it's easy to end up there before you're supposed to)
Constantly respawning enemies even in towns - don't even have to scroll the screen
The movement between some areas is a bit jarring (walk into a house and end up on the other side of a cave?)
Some control/interface issues (jumping cancels your attack, almost no jump height control while wearing the sandals, forward momentum as you're attacking while landing is weird (lose it if you attack right after landing, don't lose it you attack right before which) - can make you either not reach or slide into enemies, pretty floaty controls (Zelda II-like), stabbing in mid-air prevents you from controlling your jump (makes Cyclops and other tall monster fights annoying), poor jump height control (also makes the previously mentioned fights annoying), Can't jump on to/off of stairs, needing momentum to switch gravity for your avatar is a bit tedious, have to kneel to pick up item drops - can't do it near stairs, can't jump off of or onto stairs, can't jump between screens - if doing it vertically and downward then the fall is treated like a death pit)
No journal/log feature (you're pretty much forced to take notes to make progress as there are so many different hints and directions given that connect to other areas than the one you're in)
NPCs act like parts of a walkthrough (handing out clues in a non-human fashion)
Some cheap hits from enemies appearing when you enter an area and the unexpected pit in beginning of Attica
Some trial & error (which room to use the crystal ball in, getting to the first ambrosia/level up item and the red salamanders in the cave (there is a vague hint in the first area but you'd still have to die over and over from the other pits in the cave to find it), have to kneel at the second fountain from the entrance in attica to refill HP - the other one does nothing, finding the first level up/upgrade item, some quests and hints are pretty damn vague (prove that you are who you claim to be=find a crystal ball to find a nymph in a certain cave!, prometheus the only person who knows how to use the staff - ok so where is he?, vague hints for finding the first nymph and second acorn/ambrosia (level up item in Peloponnesus forest)), one misleading hint to the location of the flask as it's actually in laconia and not floating, "never hit the pavement of the third pillar by the seashore"=do hit the pillars so you can find a path and a flask, some NPCs refer to areas within sub areas which aren't marked on the world map and there are no signs within sub areas (athens, garden of hesperides, )
Temples don't heal you and there are no healers in towns even early on - leads to some grinding unless you're really good/patient as health drops are also somewhat rare
Some dead space
Pretty simple bosses overall
Some money grinding - also keep getting drops that you have a full stock of+money caps at 99
Uneven difficulty (spikes at lamia mini-boss near attica (half-snake archer), easy first main boss (lion), easy green dragon boss)
Some annoying enemies (Crete maze, monkeys and rock dropping birds combined, bats in some situations, small spear throwing guys before getting the shield), shooting with the strongest sword (which costs 70 olives) costs health until you also get a bracelet (ugh), backtracking (the Pegasus helps but you get it about halfway through), no item descriptions in the in-game menu (nectar flask), all your weapons have piss poor reach, some annoying music tracks (first cave, tartarus), repeats the cyclops boss once an the golem is basically the same boss, too many mazes with samey looking rooms