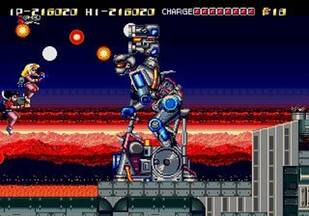 
​
+ Innovative control method, humorous, unlockable stage select, difficulty options, smart bombs, HP bar which can be increased (if you die though it’s back to the beginning of the stage), hidden HP in some stages, some new enemy attacks on hard mode,

+/- While the drum samples used for the music are pretty impressive they are too loud in the mix, replaces the smart bomb with an extra ally during the final stage, negative power ups (speed down)