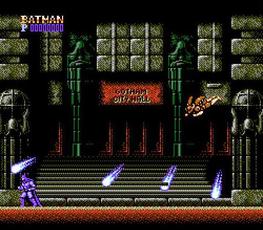 ​
​
​
+ Three different secondary weapons that you can switch between on the fly (no pausing), wall jumping, nice animated cutscenes, some alternate paths through the levels, good art direction and use of color, unlimited continues? (tested 8 times), good initial enemy variation, some large sprites, some nice sprite animaiton, fast paced overall

- Some trial & error (a couple of leaps of faith, boss patterns, some enemies can shoot slightly from off screen), jumping right after attacking cancels the attack, if you jump or attack right before landing then the action is cancelled, slight delay when jumping (also when landing if you didn’t press forward), slight delay when turning around in mid-air if you don’t also attack, not very true to the source material, batman removes your selected weapon when entering a new area, sometimes sloppy hit detection (the traps, some bosses), repeating enemies and level designs, quirky game mechanics (the punch is generally the most effective attack, you can pass through enemies while attacking them (making some bosses complete pushovers)), the triple shot is pretty much useless even though it's the most expensive, no batmobile or batwing segments, some dead space here and there, no options, the gun and boomerang have a lower rate of fire in mid-air, harder enemies don’t give better loot, game doesn’t show bosses’ liftbars, third boss fight is pretty much a battle of attrition, no checkpoint before the final two bosses (which you need to fight in a row), no life drops from the trap spawners in the final area