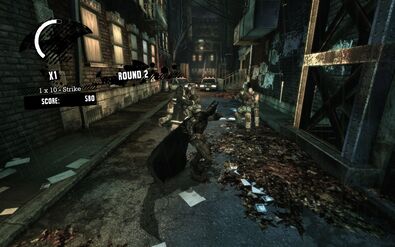 +/-
Pretty much linear structure (get access to a hub area outside of the asylum after the first sub area but can only do the following areas in a set order, can rescue the three doctors in the medical facility in any order and do the two pump rooms near the caves later on in either order, many optional riddler quests (find and scan or pick up objects based on clues for bonus exp and comments by the riddler) and lore items (spirit of arkham short story bits - also gives some exp), )
Auto-save w/ frequent checkpoints (can reload from the last one at any point, single save slot only, unlimited lives)
2D map system (auto-mapper - each room/sub area's layout is revealed as you enter it, shows doors and layouts but doesn't mark locked doors/electronic barriers/switches/riddler trophies/ventilation cover grates/breakable walls, can find a secret map in each area but it only reveals the riddler trophy locations)
Partial HP regen after each fight (depends on your performance and how many enemies were taken out?)
Some aim assist when throwing batarangs without manually aiming
Semi-interactive intro cutscene (can only walk around and trigger some NPC comments while the scene plays out for about 10-15 mins in the beginning; similar to Half-Life)
Almost everyone looks like a bodybuilder and somewhat rubbery and/or somewhat sweaty/oily
Very over the top and "badass" dialogue
Can hit enemies while they're down with RT+Y (very forgiving hit detection on this move - if you stand about 2m away from a knocked down enemy then Batman automatically glides towards them quickly and performs the move which looks pretty funny)
180 degree quick turn and FP view are mapped to L3 and R3 (thumb stick buttons) respectively
The game is forgiving about falling into pits and gas hazards - can just hit R1/RB to get back up
No real urgency to some early situations where the game tells you that you have to hurry (such as the guard clinging to a ledge in the beginning) - some timed segments later on such as in the mansion and penitentiary though
Killathon element in some rooms (have to take out all enemies to progress)
No need to deal with security cameras, have to get the upgrade and build up a combo meter/multiplier to 8 hits to be able to throw enemies - can be reduced to 5 hits with an upgrade, the Inverted Takedown move (string up an enemy below you while hanging from a gargoyle statue) isn't stealthy - cool move though and can be used to lure enemies as well as scare them by cutting the rope holding the enemy as they discover them, Remote Control Batarang is fun but its use is situational at best, can't use the grapple hook on enemies (can use the batclaw which is gained a few hours into the game), enemies are fairly easy to shake by using the grapple hook and tend to forget to look up afterwards, platforming is similar to Ocarina of Time - if there's no pit to jump across then you perform a roll move instead (can do a jump kick while running though), you can use the grapple hook while on lower ground below a ledge but not while standing on a ledge near it and at the same height unless you're in a room with multiple gargoyle statues - sometimes annoying but also used for some basic platforming puzzles (in the medical facility for example), no skill tree respec (not really needed unless perhaps if you consistently pick the non-melee combat upgrades and avoid the lifebar upgrades as well), can't cancel a punch into a counter attack, very few shortcuts, no invisibility or cloaking gadgets, some of the music sounds a lot like tenser moments in the Lost TV series OST, Some delay when using a grapple hook during which you can't cancel it - can be bad when being shot at, can't use gadgets while in ventilation shafts, the Croc fight/escape segment is creative but a bit drawn out and you suddenly die in one hit here, detective mode is a bit too good in that you can spot every enemy from very far away and through walls+very easily spot breakable walls (then again some stealth segments would be frustrating without it), you don't get to properly fight Scarecrow after finishing the small 2.5D stealth segments with him (in the last one you fight some enemies followed by a cutscene with Batman turning the spotlight at him and a bit later he's killed off by Croc instead), the game goes into FP view in the visitor room next to the penitentiary and doesn't let you scan or use items (seems you're only supposed to go here for some additional Joker dialogue in-between sub areas) - this room leads to an arena for the finale (the preceding fights are good but I expected some sort of "dungeon" area before the last boss), you never get to fight alongside NPCs (true to the character but seems artificial at times), can't cancel a roll animation to climb something, external control config besides camera inversion

Bugs:
-Sometimes hectic music plays while nothing is really happening
-Hit detection bug around a ledge at one point during the scarecrow segment
-Some dialogue scenes trigger a bit later than they should


Comment:
So I've been playing Batman: Arkham Asylum (GOTY Edition) lately and I'm about halfway through it now, maybe a bit more. It's a semi-MV game of sorts, being structured like Zelda, almost completely linear, and basically using 3D Zelda's jump mechanics, though the platforming is a bit more involved at times like in WW or TP. Most gating is also key gating though I recently got the line launcher and it seems to have some interesting uses (there's also a basic hacking mini-game but it's more of a thing that feels cool to do than any kind of challenge).

​One of its biggest strengths is the characterization of the villains, and the near constant presence of the Joker (voiced by Mark Hamill), who comments on things via the loudspeakers of the asylum like you're in Jonestown or something. Aesthetically it's quite impressive too, with a unified but still varied look as you explore the various asylum buldings and garden, though it's funny how almost everyone looks like a bodybuilder and some of Batman's grunts are hilarious. I was also impressed with the scarecrow segments, which seem to take a page from Silent Hill 2 as well as some 2.5D platformers, and do a good job of retelling parts of Batman's backstory while keeping you mostly in-game.

The combat is actually pretty involved contrary to my first impression of it, and the feedback when hitting enemies is really good. I'm getting better at stringing combos together, though the automatic slowdown is bothering me a bit at times. The stealth/trapping aspect is also good, with a decent variety to how you can take out enemies, and it's cool both how you can stand back and listen in on enemy conversations as well as observe how they get more and more freaked out as you start taking parts of a group of guards out or scaring them. So far the game feels kind of divided into stealth, platforming/exploration and beat 'em up segments without that much overlap besides hook shotting around during the first though, and the stealth takes a lot more time for me than the rest. I should mention the game has a few control/camera and interface issues, though nothing game breaking (for example I had to look up the requirements for the locked upgrades, it's a bit too easy to get stuck on certain walls and smaller obstacles while moving around, and the camera control reverses during the scarecrow segments).

There's also a light puzzle element in finding riddler trophies or objects to scan, and how you take out certain enemy groups or traverse certain areas. Not that challenging overall and sometimes the game is too picky about how you're looking at something you want to scan, or places something far from the main path for no reason, but pretty fun still.
The game has a decent map system though it's in 2D and doesn't mark nor let you mark locked doors/barriers, security boxes, breakable walls or ventilation grates so you have to memorize their locations if you want to get everything and there are a lot of them (though the scanning feature does help a lot with spotting them quickly). While there are sub area maps you can find, these only show the location of the riddler trophies and scannable objects.

As I said it's basically linear, which is a shame when you have a nice hub area structure laid out, but when backtracking for trophies or sub goals (the game sometimes makes you go back to previously visited areas to progress the story) you'll sometimes encounter new enemies, there's a large scale environmental change at one point, and the game introduces new mechanics at a pretty steady pace so it rarely feels repetitive.

I'd say all individual gameplay aspects here are solid if not top tier, and as a whole it's a really fun game. With a bit more open endedness, map markers and a few control/interface tweaks it probably would've been a fave.