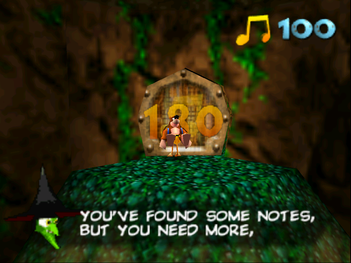 ​
+ Learn new moves and gain transformations along the way which help you reach new areas (can only transform at mumbo's hut, rarely used to reach an item in a previous area though (and mainly used in the hub area)), double/hover and super jump from the get go, optional tutorial at the beginning, can speed up dialogue (not instant per paragraph/text box though, can also skip it with l+r+b), the music seamlessly changes a bit depending on where the player moves (changes its instrumentation when near level entrance jigsaw puzzles, underwater it becomes mellow and muffled with different instrumentation, fades as you fly higher in treasure trove cove, removes certain puzzle-related elements at one point in rusty bucket base), animated portraits during dialogue (the animation is so-so though and some portraits look a bit rough due to color reduction), upgradeable health bar (collect the honeycomb pieces), mini-bosses (but no main bosses besides the final one), warp points/cauldrons (can only warp to found cauldrons and there's only a few of them though), temporary invincibility power up (triggered manually and uses up a golden feather every 2 seconds), many hidden items, dropped HP items don't disappear (and eggs shat/shot backwards can be recollected), various enemies talk to you without interrupting gameplay (most tutorial messages also don't interrupt gameplay) and so does the villain at various points, temporary speed and wading boots power ups (the latter let you move through shallow and hazardous liquids), can exit unbeaten levels at their entrances, hub area (gradually opens up a bit more but uses gated progression (collecting and abilites) throughout the game, some minor puzzles and hidden items here as well as some hazards and enemies), some memorable characters (Gruntilda (the villain) - a witch who watches and comments on the player's actions over the course of the game without interrupting gameplay, Brentilda - the villain's relatively friendly but bitter sister), some nice lighting effects, pretty expressive and well animated character models overall, some decent puzzles involving using transformations in the hub area, decent mini-games (collect/eat race, simon says, escort/protect mission of sorts, race, timed memory while harassed by an enemy, board game segment, etc.), can cause environmental changes in some levels (MMX, Wario Land, etc.), skippable tutorial,

+/- Save and quit feature (can save anywhere, only one slot per game though and it doesn't save partial level progress in terms of notes and jinjos collected - changed in the XBLA ver.), partially non-linear (have to enter the first couple of levels and collect the required moves in order to then enter the third one and onwards - oddly enough you can unlock the swamp level after the first level (mountain) but not get to its hub area segment before getting 180 notes so you have to play the second level (treasure trove cove) first), collectathon (3 optional spellbooks - first one isn't really worth it (200 eggs), 2-6+10+5+100 items/NPCs per world/level (2-6 honeycombs (optional), 10 jigsaw puzzle pieces which unlock new levels, 100 notes for note doors - need 50 to get to the second part of the hub area and 150+ to get to the third, rescue mission - 1 jigsaw piece per 5 jinjos rescued, skulls - unlock transformations accessed via mumbo jumbo in his hut), borrows some moves from Mario 64 (tree and pole climbing, the snow man in the snow level, NPCs with fetch quests, the way jigsaw pieces appear is very similar, flight mechanics are similar but more forgiving and you can also attack here which is pretty fun, stomp move, super jump feels similar) and the carried sidekick idea from Earthworm Jim 2, can't grab ledges but hit detection is pretty forgiving near platform edges, some movement delay right after rolling (makes it slower than running, rolling and then double jumping quickly seems slightly faster though), oxygen mechanic underwater, ammo-based projectile weapon+flight (also need to launch from certain pads)+invincibility, can't shoot while jumping, some invincible enemies, enemies don't respawn until leaving a level, a bit odd how the game shows a game over cutscene when saving and quitting, mostly open-ended exploration-based/maze levels which are also relatively large and time consuming to fully beat, extra lives system, only 9 levels besides the hub area but they are pretty big and varied, mostly basic puzzles but they do add some variety, weird noises instead of voice samples during dialouge (generally not bad but can sometimes be annoying), fall damage when falling very far, minor framedrops in a few segments,

- Too much forced collecting of generic key style items placed in mundane spots (to even get to the final boss you'll need to have collected 810/900 musical notes and 94/100 jigsaw pieces (and in order to beat the final boss you'll need 882 musical notes!)), some camera/control issues (can't shoot in FP view mode, can't rotate the camera in various situations, rotation is in steps rather than free (pressing R puts the view behind your avatar which is an improvement over Mario 64 but in various situations this doesn't work either), can't rotate vertically/on the y-plane - actually a problem when flying or trying to look down into the biting chests for example, inconsistent knockback after taking a hit from certain attacks - it seems random which direction you'll move in, sometimes can't climb stairs), no level or hub area maps (the good but not great draw distance makes it harder to spot items by looking around in FP view which leads to some trial & error), unforgiving hit detection when picking up items (breaks flow, in some levels a bunch of items are also placed near platform edges so you have to take it slower while collecting them, the villain sometimes gives you gameplay hints, note and jinjo rescue progress semi-resets when exiting a level (your stats are saved so if you collected enough notes to progress in the hub area/lair you don't have to go back and get them again but if you do replay a level the items are respawned for some reason so you have to get what you got earlier and then the rest to improve on your previous total if you didn't 100% a category for a level on first try - this gets increasingly annoying in later levels), some trial & error (sometimes no clue to a hidden item's location, overly picky positioning requirement when turning the large keys underwater), the transformations are a bit underused, some parts where you can fall down and have to repeat a relatively long segment to get back to where you were, somewhat slow movement as the baby alligator and it's not that much fun to use in the swamp since there's no risk involved, some backtracking (when loading a save you're sent back to the beginning of the hub area/lair rather than the entrance to the level you were at, the game could've asked if you wanted to exit a level after getting 100% in it (or 100% of the mandatory items), can't warp back to mumbo's huts - transformations are used for some hub area puzzles), somewhat dull "feed the alligators" mission in the swamp level, slow surface swimming, no checkpoints within levels and collecting progression in a level isn't saved when dying either (surviving is generally easy though, can be annoying in the board game level where you can die from answering a question wrong and have to memorize a bunch of trivia over the course of the game) - oddly punishing when getting a game over adds no penalty besides having to backtrack to the level you died at as long as you had saved your progress beforehand, mostly generic snow white/the fly-inspired story, unskippable intro, some smudgy textures and dated 2D elements in the visuals (the latter blend in better than in most previous N64 games though), some dead space, the race for the temporarily unlocked door requiring the running shoes in the desert level is kind of frustrating (you can reach the door but then end up not entering because the hatch blocks you and you can't quite see where you are as you drop into the hole),
​