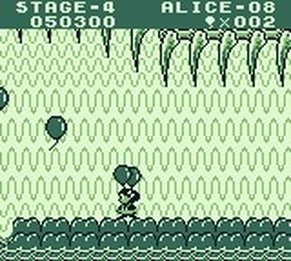 ​+ Hybrid gameplay (platforming and balloon flight), better variation (bosses, travel through the inside of a whale at one point), interesting replacing mechanic (can let go of the balloons you're holding to do platform jumps or walk through narrow paths and then use a pump to blow new ones, need to let go to damage bosses), 3 hitpoints (not always - see below), forgiving checkpoints, temporary invincibility + speed up item, stop watch item (classic/trip mode only though), 2-player vs. link mode,

+/- A bit odd that you can't grab onto collectible balloons (could've been something else), the bouncy physics are usually fun but sometimes annoying when platforming (you bounce off of edges of platforms and walls), female protagonist (save your little brother), can't jump off of the ground while holding balloons (could've let you do it while holding down on the d-pad for example; annoying when on a platform moving upwards), starts off very easy but gets fairly tough after a few levels,

- Some cheap deaths (end of fish boss fight - screen starts scrolling and you barely have time to blow a new balloon), many enemies can't be killed (would've been more fun if you could let go while floating above an enemy and then bounce back up and grab the balloon), inconsistent damage levels (fire, electricity, crushing by screen edge and some enemies and falling spikes kill instantly), trial & error (need to memorize some segments to not get crushed), inconsistent hit detection (very lenient when bouncing off of enemies while flying, unforgiving around platform edges when without balloons), kinda slow falling speed without balloons and rising speed with them, boring bonus levels, the default scrolling speed is a bit too slow for some situations (could've made them more eventful or increased the speed slightly), pretty short (8 levels)


Comment:
Worth trying if you're into joust-like games or trip mode in the first game. The pump mechanic is cool, they've added some bosses and there are some great songs. It's not quite the evolution that DK '94 was for its prequel though; It's pretty short and has a few cheap death moments (some enemies and hazards override the extra hit points from the balloons), and it would've been more interesting if you could kill the unkillable enemies by letting go in mid-air and then grabbing the balloons again after bouncing, as a risk/reward thing.
​