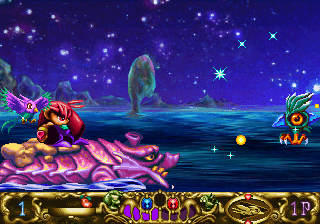 + 2-player co-op (asymmetric - one player controls the bird attacks?), nice cutscenes, some cool attacks (crystal breath, earthquake, slam ground, air dash (as the bird)), smart bombs (except not immediate and they don't hit everything on screen), decent art direction, good use of color, transparencies and scaling effects, dkc/sonic-style bouncing on enemies, some good bosses (plant, dragon, ice cave boss), skippable cutscenes, throw trees and boulders, get to play as the bird for one boss fight (control's a bit stiff though), some new ideas (final level, falling pillars segment), life refill at most bosses

+/- Running could've been bound to a button instead of having to double tap the d-pad (would've made some platforming and boss fights less frustrating), slight delay on all attacks, no score counter

- No in-game explanation of how the bird works (you also get to control it for a boss fight without knowing the controls), pretty crappy english voice acting, generic and cheesy story aimed at kids, somewhat slow paced, somewhat sluggish and floaty control (takes a sec to perform a command after running due to an animation, Astal takes a few extra steps after releasing the d-pad), some ideas/segments seem underdeveloped/lack depth (bowmen attack, taking protection from falling rocks with a large boulder), some trial & error (mechanics, bosses, boat ride), can't move while crouching or look up/down for hazards, some delay when issuing commands to the bird, the game auto-selects the 'get health' command when you're hit - also auto-selects the middle command if you're fully charged (this also causes an annoying sfx), somewhat odd hit detection on horned beast (behemoth) and final boss, some cheap attacks (final stage and bosses), no secrets, short (5 levels), no difficulty options (you can have up to 99 levels after beating it once - why though?), difficulty spike at final level, during the final bosses special attacks seem to be handed out randomly? (you need energy for them normally)