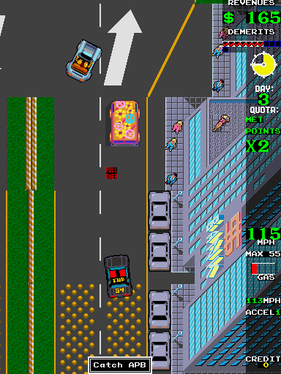 -
Trial & error (crossing trains, other cars can drive through some blockades (lvls 2 and 4 for example, in 4 you can run into cars at the beginning because of this) - makes it look like you can too, ambush attack by the first boss - hard to spot the dynamite the first time you play, interrogation isn't explained beforehand)
Some annoying sfx and voices
So-so use of the YM2151 chip overall
Too easy to die (car blows up from most collisions - can buy armor but it's rare on normal, game over after 8 demerits (colliding with non-criminals, running over pedestrians))
Interrogation is done by button mashing to fill up a meter and you have to replay the level if you fail
Fairly easy to miss the item you want to buy in shops (since you want to be passing through them quickly)
Can't go in reverse? (played in mame, pedal and car wheel game)
Forced to replay boss levels if you don't meet the quota but not if you don't catch/kill the boss (=more forced collecting; would've been more fun if you could just take the demerits and progress)
Weird hit detection when touching against some objects (would've been better if the car would turn while gliding away from the object instead of wiggling back and forth)