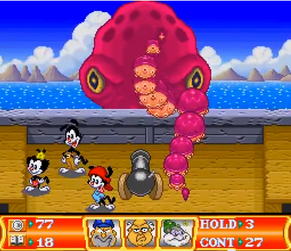 + Control a team of the three characters from the show (only the one controlled can get hit), switch characters on the fly, captures the show well in terms of the graphics and sound, pretty fast paced overall, control config, decent intro cutscene (small pics with minor animation and text), open ended structure (hub map, two encounters to avoid similar to SMB3 or Ghostbusters (SMS/NES)), hidden items (scene scripts - find 24 to get the best ending), pretty good variation within each level, fairly large sprites (not always a good thing - see below), 2.5d platformer gameplay, minor puzzles for most boss fights,

+/- A bit odd how you need to stand on each other to reach higher spots but then the rest of the team gets up there without issues (this mechanic also seems underused), you usually can't fight back against enemies so most of the game is a variation on avoiding stuff and getting chased, password save, fairly long levels, slot machine mechanic like in Sparkster (MD) except there aren't any negative effects?, the chicken eggs - uninteractive?, various pop culture references,

- Plenty of slowdown, not much use for the grab and throw moves overall, the slot machine mechanic rarely does anything? (could've given you ways to attack or move differently - can give you lives or temporary invincibility), die in one hit (lose one character per time before fully dying - need to watch a small cutscene, need to play a short level to get a character back), annoying dash length limit (need to press the button twice to dash again and there's a small delay before you start dashing), trial & error (some leaps of faith (can't look up/down), the maze segment, inconsistent sideways jumping in the water themed level, the police enemy - he's pretty fast but you can jump on him to briefly stun him and get some coins apparently, truck chase), no difference between the characters?, cheap hits here and there (flying police at water tower, some fast enemy attacks (hard to avoid some things due to the sprites being so large and there being no dodge move)), last level is basically a retread of the other ones,