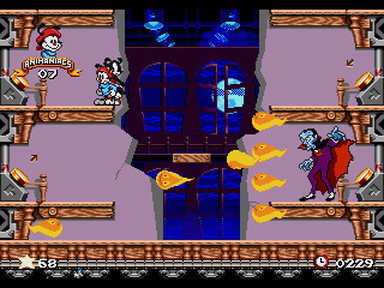 ​
+ Control a team of the three characters from the show (only the one controlled can get hit), switch characters on the fly, captures the show pretty well in terms of the graphics and sound (most characters make cameos), control and difficulty options, decent cutscenes (small pics with minor animation and text for the intro and between levels - more of them than in the SNES game), open ended structure (MM-style level select map - simpler than on SNES as there are no map encounters or controllable avatars to move around the map (instead there's an animation of the characters fleeing from the police), pretty good variation within each level, more puzzle focus than in the SNES game (each character has a unique ability - hammer (trigger bombs and switches, attack), racket (attack - this char can also push and pull blocks) and blow kiss (hypnotize some enemies/npcs)), some large sprites, unique themes for each sub part of a level, characters have a lifebar unlike in the SNES version (represented by the look on the character's face icon) - it's shared between chars though and spikes and wrecking balls still kill in one hit, short tutorial level lets you understand each ability and introduces some side chars, the main boss char (the police) appears to pester you within the levels, gradius ship cameo, hidden mini-game (roulette), some hidden items and paths,

+/- Can't make the team stand on each other to reach higher places, password save, fairly long levels (only five of them though if not counting the short intro level), no slot machine mechanic, various pop culture references, smaller sprites and more basic/flat and geometric backgrounds than in the SNES game, no grab and throw move, can't duck (used in some puzzles), no dash move (somewhat slow movement speed - all characters move the same way), can't move while attacking, time limit (can find clock power ups), infinite continues, only the final boss fight makes you use all three characters to beat it,

- Puzzles can feel a bit convoluted in that another character's action seems like it should've worked as well (moving the bird on the swinging platforms in studio 1 for example), some control issues (some delay when switching between characters - only a big problem at the final boss though, racket and hammer attacks get canceled if you attack right before landing (not always the case with the hammer), hammering and blow kissing is faster in mid-air than when on the ground (not so for the racket), fairly high default jump height), trial & error (two invisible traps moving you backwards in a level, first police encounter in the western level where horses come running into you right after you beat him, some traps in the star wars studio, can't kill/beat the police in certain segments, the hammer usually can't hit the police, possible to get semi-stuck at a block puzzle in the final level, spike looking object in final level that doesn't harm you, some very tight jumps, fairly easy to miss the hidden mini-game at the end of the cart tracks segment (where you jump down a pit towards some stars), one or two leaps of faith (can't look up/down), train chase boss)), a few too many block puzzles (block pushing is kinda slow), the girl's ability is kind of underutilized, sometimes uneven difficulty (easy dracula boss, tough train chase boss), a few poorly animated sprites (the swimming elephant in studio 1, overall somewhat worse animation than on SNES), sometimes not worth it doing a puzzle to get to an item (sometimes just a single star), some parts before the finale seem unfinished (odd automatic car ride to the last item, pinky and the brain steal your items without the game showing how) and nonsensical ending (the animaniacs end up giving the items to pinky and the brain right after beating the brain's robot), sometimes tinny instruments without echo effects, no alternate ending?,