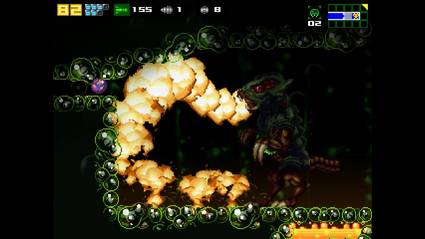 +
Higher res and more zoomed out view
Controls are updated to Zero Mission level (easier bomb jump (perhaps too easy?), 8-way targeting with diagonal aiming while standing still, ledge grabbing (automatic can be toggled on or off), faster bombing/jumps/falls/ball, don't bounce upwards if bombing open a narrow path and pushing towards it, one button press to go into morph ball mode (allows for jumping then morphing and sticking to walls or ceilings with spider ball), etc.) but with classic options for various moves (SM or ZM style diagonal targeting for example)
New bosses (very good - especially the space jump and plasma beam guardians) and background themes that fit in well with the world
Many nice visual touches (shows lava dropping after you exit the room with the first metroid, water dripping, glow effects, power bomb explosion, etc.)
Can now set spider ball to its own button which toggles it (or as an option: activates as long as you hold the button)
Option to toggle the metroid counter (off, global, local - the last one updates as you explore with a new scanner feature that auto-triggers from time to time), adds a ZM style map and a log book (self-updating enemy and environment info (a bunch of lore has been added), mission briefing), better boss AI and bosses move around off screen (sometimes alpha metroids can still be trapped in loops though), some enemies are made slightly more interesting (chozo turrets, etc.), marker feature for the map (only one at a time though and you can't add any text notes to it), difficulty (easy-hard)/control/sound options, faster missiles and missile rate of fire, some good new puzzles (water stream rooms in hydro station, the part where you control an enemy jumper robot and have to drop super missiles on walls to create a path for Samus (weird that you can't pick up the super missiles it uses though)), the treadmill puzzle, expands heavily on area 6 (power up the building, new boss, new optional basement area with an escape sequence and new boss), controllable bomb batch/spread attacks (hold the button and press the direction you want them to go in), start with 30 missiles, optional hints and new scan (info) notifications, improved final boss (several increasingly aggressive phases before it swallows you however they all play pretty much the same way),

+/-
Charging a shot draws nearby ammo and HP towards Samus (a bit too streamlined for a 2D game though somewhat legitimately useful on occasion)
Enemy hp and ammo drops still disappear after a few seconds
More cartoony and colorful art direction (ZM/Fusion style)
Many soundtrack changes (ambient tracks are more subtle and not very accurate to M2, some new melodical tracks which are very good overall, placement of ambient tracks seem a bit more effective overall) - the game sounds more like the Prime series overall
More frequent save points and they now refill your health and ammo (ammo and health stations are all removed?)
Spring ball boss is much improved but this makes it steal the show in area 2 (same thing happens to an extent in areas 3 and 6, different entrance for the spring ball boss (now it's in the statue; I prefer the original), you can now morph into a ball in mid-air (can give you more mid-air control/horizontal length if you spam it), alpha metroids can jam your missile rate of fire for half a second or so if they hit you? (hitting bosses' shells/non-weak spots also slows your rate of fire a little bit), can't use charged shots as weaker missiles for when you run out, overpowered space jump (faster and much easier to pull off, can do it again after taking a hit in mid-air or falling out of a somersault), you get some upgrades in very quick succession (varia suit, speed boots, space jump), environment progression follows SM more than M2 (norfair-like area->shipwreck-like area->maridia-like area), can't move the blue cores through doors (could've been used to do a minor sequence break in that area to get some items ahead of time - or a more useful break implemented by the designer), can't stand on frozen enemies, no need to be in ball form to be swallowed by the final boss (could've been hinted at in the description maybe?),

-
Spider ball is pretty much as slow as before (feels even slower when all other moves are faster and it's easier to accidentally bomb yourself loose, should also be easier to bomb jump to the ceiling and grab on (ie slightly more lenient about your positioning))
Lose some forward momentum after jumping and landing (ZM style)
Contra-like jumps (much more vertical focused than in SM for example)
Can't hold down/up to go in and out of (intro standing position) morph ball mod
No auto-fire (you do get a charge shot pretty soon though)
​No DKC-style jump (can't unfold in mid-air and jump to get further), alpha metroids still hang in the air but now they let you hit them once before attacking (would've been more interesting to see them do stuff if you sneak up on them), somewhat annoying to get log book pop-ups during boss fights, some dead space, some enemies take too many hits to kill (four charge shots (!) to kill the purple flyers moving in a diamond pattern), some later areas aren't quite up to par with the official ZM backgrounds (southern area 3), some enemy behaviours weren't updated enough (the "robot owls", ), backtracking (can't use the save points as teleporters between visited areas and while you unlock a teleport system of sorts it happens pretty late), some hidden paths still don't have good visual clues (first hidden path near the ship for example) while some others now have very obvious clues, less dramatic entrance for the first metroid boss (on the other hand some later ones have better entrances), can't shoot during the "turn around" animation (turning was instant before?), some tedious shinespark puzzles in area 3 (the factory - tons of enemies in the way, southern sub area - hard to move without losing the spark) - these are optional though, can't use the spider ball in lava (creates a difficulty spike if you fall down in the southern part of the factory in area 3), some effects look so-so (some lights, the drill machine could've made the screen shake a bit, the zeta metroid's acid projectile), it looks a bit silly when missiles bounce off of an enemy and fall downwards, pretty much as linear as before (there are barriers in the lava on the way to areas 1-4 (first area=area 0/surface) before you kill all metroids before them, while you unlock a teleport system of sorts it happens pretty late and there isn't that much to go back for) - since there already were a bombable wall before the route to area 2 that in itself could've been the barrier and opened up the game a little bit more, some trial & error (optional escape sequence (where you get the power bomb) leaves you with 5 HP left, super missile blocks aren't shown when boost running over them or shooting them with the beam - pretty sure the former was the case in SM), some boss patterns (spring ball boss ball form being vulnerable to bombs but not missiles), surprise fight in southwestern area 2 (you can escape though)), area 4/5 (combined into one part) is pretty easy, difficulty spike at the new boss in area 6 (hard to read the second phase, very hard to avoid the blue weapon and it does tons of damage), tedious bomb paths near the entrance to the optional area, gamma metroids die too quickly to super missiles (only 2 missiles), no need for the ricochet noise on shielded enemies when you have the plasma beam (it gets annoying), too many easy bosses early on (removing or changing a handful of alpha metroids would't have hurt), somewhat too long of a delay before samus stands up from crouching position when pressing left or right, occasionally distracting camera quirks (moves ahead a bit when reaching the edge of a platform from below which can throw off your wall jump timing), easy and mostly empty volcanic area (south west) and "the nest" area, so-so animation on the surviving rescue team fighting the omega metroid (metroid dinosaur) and the music shouldn't have switched back to the regular area music right after killing the metroid (would've been more impactful with sad/scary ambience here), it takes a few seconds for frozen ground-borne enemies to crack and drop their loot, final area before the lab could've been more impactful if a bit shorter and using either a less intense variation of the oppressive/gloomy pre-final boss music or a more ambient version of the previous area's music, somewhat drawn out post-final boss sequence where the baby metroid helps Samus escape (there's no timer or other threat here so just 3-4 walls was all it needed), somewhat less impactful final boss entrance without the screen going dark in-between rooms

​
Bugs:
-Possible to fall off the wall in spider ball mode early in Area 1 if you press up instead of l/r to climb (the eastern wall in a large blue-ish room with mechanical looking platforms to the west, ),
-Get item pop-up sometimes doesn't show