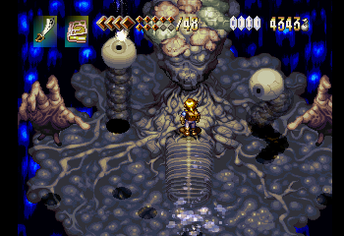 -
Plot oddities (No one bothers to put out the fire!? (and why are the Murgg still a threat after you've cleansed their town/dungeon?), the game sets itself up to let you reveal Ronan as corrupted through Jess but then doesn't do anything with the idea, Giles and Ronan turning corrupt is done rather poorly (They both openly blame you and admit their treachery but noone reacts - Alundra and Septimus just leave the church after finding the Melzas statue, Meia doesn't even know about the Melzas statue in the church until she 'senses' it later on))
minor hit detection problems around pillars
after Torla supposedly erupts there is no trace of the lava outside of it and you have to stand in a certain place to activate the geysers leading into it
the monkey king and the Dragon are wimps
it's possible to get completely stuck in the fairy pond
​two golem bosses in a row to start with and then three hidden eye bosses in a row later on (pretty lame bosses as well), when you meet the captain of the ship again all he says is that he opened up a shop to lead a safer life - what happened to the others, how'd he survive, etc?, you have to go out of your way for simple herbs when some life vessels are out in the open, no dungeon maps, the villagers talk a lot about the Murgg attacking but it never happens, Annoying plot devices (Alundra doesn't talk about the monkey king or the crests, the villagers can break the grey boulders but don't help with the monkey forest part?, Alundra doesn't talk to people about the weird girl's dreams etc.), slow paced (can't skip/speed up cutscene dialogue (it's veery slow), slow get item jingle, slow animated scenes), can't switch the main weapon without entering a menu screen (L and R buttons?), some really annoying puzzles (jumping puzzles later on, the elevator - you're supposed to jump on it three times but the flashing is all messed up/doesnt work properly?, the ordering of the Saints - "Brown respects me more than he needs to" implies that Brown is more important than Green but it's the other way around), pretty dated dramaturgy (SNES style), cliché story ("you are the chosen one as told in your dreams to kill the destroyer yadayada"), uneven difficulty (easy enemies AI-wise take too many hits to kill, gets easier in some ways later on), unbalanced weapons (flails are weak), the Roulette game, can't change direction while running, somewhat slow beginning, awful ending song (english), tedious desert puzzle (warp back to beginning at every mistake), a surfer dude in a medieval religious village setting?, you have to visit the fortuneteller to access the island map, trial & error (lots of pixel perfect jumps, puzzles that send you backwards when you make a mistake), ending cutscene contains parts of the intro