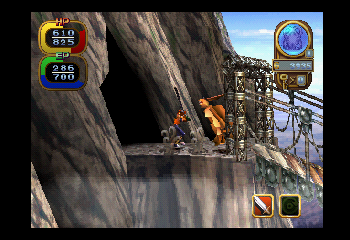 
​+
Run button (can set it to tap to activate or hold, no "always run" option though and can't tap again to stop) and running attack+slide moves
3 camera angle and zoom settings (zoomed in and near isometric, near isometric view, zoomed out and bird's eye view)
In medias res beginning (infiltrate an airship)
Can learn basic combo attacks (give puzzle pieces to lord Jeehan - up to 5 hits but nothing interesting compared to something like DMC as you're just mashing the same button) and a charge attack (need to find 3 toilets and tell Jeehan's apprentice about them)
Some decent-good puzzles (lure enemies to trigger bombs and onto switches (Landstalker), luring fire spirits into unlit torches, platforming puzzles, one-way/conveyor belt tiles puzzle in the seagull ruins dungeon, bomb chain puzzles after the volcano, change direction of moving green statue puzzle and green statue "facing to create platforms" (similar to light beam puzzles) puzzles, spatial awareness puzzle in final dungeon) and timing-based challenges
Skippable cutscenes (would've been better if there were subtitles and you could skip ahead on a per sentence or scene basis though since they get pretty long (sometimes pretty slow as well) and you want to watch them the first time around), skippable staff roll
Full control config
Difficulty options (easy and normal)
Pretty good cutscene animation and overall VA (cutscenes only), Decent dialogue
Dialogue portraits for important NPCs (but no animation or expressions)
Some interesting items (float in place in mid-air+stun enemies+manipulate green blocks with the fairy/pixie ring, steal HP and breath underwater with the siren ring (can't be removed while underwater), stomp enemies (? doesn't seem to work) or make rocks fall on them+temporarily activate certain platforms with the dryad ring, walk on lava and light torches+destroy red statues with the newt ring; elemental lord summons w/ level 2 rings which become stronger at level 3), some decent humour (silly, slapstick, some meta jokes - the key, when the bull returns, etc), several mini-games (rollerball - into the camera chase segment (similar to Crash but with checkpoints+boosters+obstacles to hinder the chasing bull+item rewards) - decent, darts - slider like in a basic golf game (meh and it's the one you go back to since it has various useful rewards), minecart/trolley ride - good except there are no items to pick up and you can't both throw rocks at the same time, pot catching - ok, bomb chain - would've been good if you could place the bombs without physically moving them with the avatar since that takes so long and most rewards aren't worth it (also weird how bombs cost more the more you've saved and kind of bullshit since you couldn't know about that beforehand), dog attack (lure dogs into jumping onto switches) - kinda fun but has some issues (dogs can get stuck or their landings on switches not register, too zoomed in), RC car "race" (really a sandbox stunt course - decent but you can't rotate the camera here so some jumps are awkward), the run - basically pac-man w/ one ghost (meh), the rally - zoomed in micro machines w/ one hit deaths (so-so), the shooter - basically robotron except some enemies also drop medals (fun until the bullshit trap on level 20), ), some decent bosses (giant spider, seagull ruins demon, whale heart, final boss's second phase though it's weird how it can end without hitting the head; most have 2 phases), some mini-bosses, enemy bombs also hurt enemies, slow MP regen if standing still (a bit too slow; can also gain HP regen but it's equally slow), sometimes have to consider what to put in your pocket/quick item menu (3 slots only and can only have one ring there at a time; one ring increases AP while one increases DP and the amulet lets you shoot 2 side by side elemental shots at once for the MP cost of one, wonder orb allows HP regen when still), pretty good boss introductions, can jump over some enemies and projectiles (can also bounce slightly on small enemies without damaging them as well as use certain enemies as platforms), new gear is shown on your avatar (Ys; there's no armor/helmets/boots though), some memorable locations (robot whale dungeon, mansion, ox tower) and characters (the pirates, alexia in the early game), outdoors areas during dungeons (Zelda II), some environmental storytelling (foreshadowing with the screw in the intro (and the other symbolism)+the ducks+the mini-boss that you can see through a telescope for example), escape sequence after the final boss, some minor sequence breaking possibilities (can steer your avatar in mid-air to skip some platforming segments, )

+/-
Mostly linear structure (backtracking to various previous areas with new abilities for items (as well as 3 optional mini-games in kindra forest) and sometimes to progress, can go to a couple of areas early but there's not much point (mini-game areas which require darts and money respectively), some non-linear dungeons (cave of prunewell, parts of varunia ruins/nightmare), can't go back to the early areas in the mid-game and in the late-game you can't reach some of the islands for a while)
Hub map (popful mail-style except there's 2 entry points to each area and which one you'll use depends on which direction you came from on the map)
Save points and HP/MP restoration points - 1-2 of each per area (can also carry hp/mp and hp+mp potions)
No fast travel until the late game (teleporters between the three ruins dungeons are unlocked after beating eden ruins, one-way teleporters out of the ox tower and some other dungeons near the end of them before that - being able to teleport into one at a mid-way or player specified point (or at least have the exit portal be two-way) would've made backtracking into them for items that can only be accessed later smoother (that or a spell/item that let you teleport out of a dungeon from anywhere in it), some teleporters in the whale dungeon and varunia ruins, gain a dragon mount in the late-game which lets you travel anywhere on the hub map)
Can't move while swinging the sword besides the running attack which has a short delay after using it and can't be canceled while doing it
During some boss fights and other segments the angle is changed to a fixed side view perspective where you can only move left/right and during others it's a tilted view/beat 'em up style perspective where you can move freely
Doesn't show enemy or boss health bars
Enemies and items in bushes respawn when exiting the room/sub area they're in (trap/puzzle objects also reset)
Somewhat randomized damage
Can loot people's houses without them reacting
Can't lock onto enemies, silent protagonist, more lighthearted/adventurous/comedic tone overall, no story connections to Alundra 1 and no dream theme, frequent loading screens (~7-9 seconds), can't carry objects between rooms/sub areas, features violence between a male and female character, can't move while charging up a charge attack - makes it less useful against various enemies, no dodging - shields can block some projectiles (not melee) if you position yourself correctly, can't pick up and throw stunned enemies, can farm for money from the piggybank in the shop at puerto medusa and in a house in Gwaba town (30 coins at a time) - this can also be done for unlimited elixirs at the room before the underground lake in the volcano, some of the music as well as the cult concept are pretty similar to FF7, can't play as Alexia (she acts like the main hero of the land but when shit goes down turns into a damsel in distress), borrows some gimmicks/puzzle elements (from Zelda 3: floor layout changing switches, Lolo?: one-way tiles, Soul Blazer?: enemy spawners), escape sequence without a timer in the sunken ship, bull betting mini-game (uninteractive; hold r2 to speed up the money slider), the dart mini-game is actually rigged so that you can't get 100 (middle) too many times in a row - have to get a different score a few times after a streak before you can start getting 100 again, long item trade quest, elixirs aren't really worth buying (tonics are also less cost efficient than herbs but since you can only carry 9 of each they can be worth it), mostly meaningless dialogue choices (however in a couple of spots you can ask an NPC things and there's a basic dialogue tree+sometimes you can choose whether to give an object to an NPC and at one point can haggle for more money from one), new shields don't seem to increase def against physical attacks (seems they instead protect against stronger projectiles), can't unlight torches with water magic or water pots, cheesy vocal staff roll song 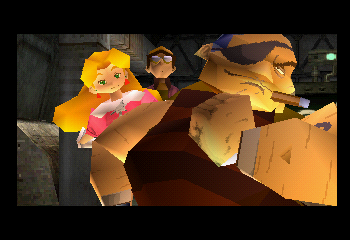 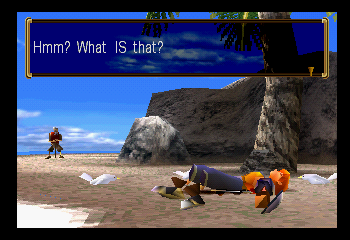 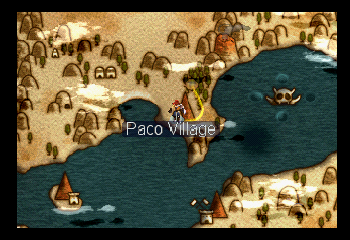 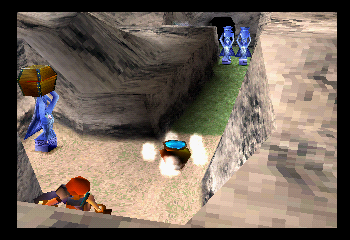 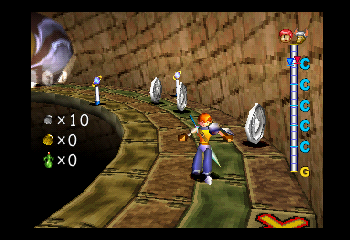 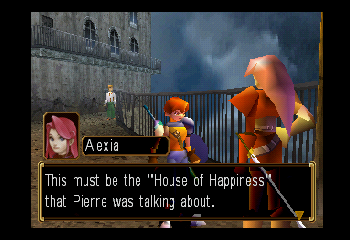 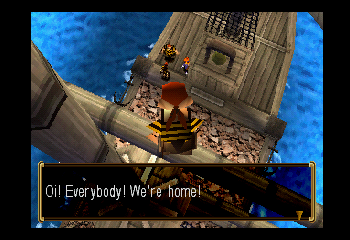 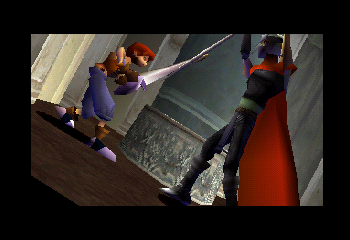 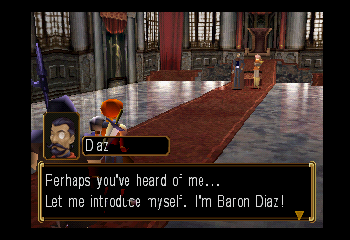