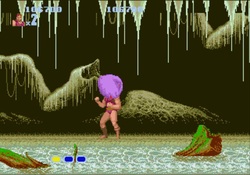 
+ Faster walking and scrolling than in the Arcade, beast forms (feels satisfying to get revenge on your enemies), large bosses, 2-player cooperative, fairly dark interpretation of Greek mythology, a cheat lets you choose which beast to turn into for each level, somewhat comical (ending, the over the top player characters, the voices), somewhat more forgiving hit detection, parallax scrolling added to backgrounds

- Can't adjust jump height, can't jump down through a platform, low colour count, easy to become overwhelmed by enemies from both sides in 1-player mode, no difficulty options (easier stages than in the Arcade but no continues, unlocks hard mode after completion), repetitive, very short (5 stages), unbalanced attacks (ranged attack is pretty redundant, punch is only useful on some enemies), not much thought given to most of the boss fights (1, 2, and 3 are very easy, you can trick the final boss fairly easily), some annoying sfx (death sound), missing some visual detail and animation (the main bad guy always looks the same while in the Arcade there are several different ones, some redrawn sprites look worse, no visual effect during cutscenes)