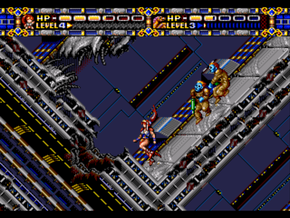 +/-
Can’t move while crouching, slight delay on movement when falling too far before landing from a jump, female protagonist,

-
​Some trial & error (familiar strengths/weaknesses, some cheap hits from flying enemies unless you take it really slow), waiting for your weapon to charge up gets tedious (but less so as you upgrade it more), some poor palette choices (also doesn't use all of the allowed palette), some bosses become too easy when using the right familiar, no DAC used for the music