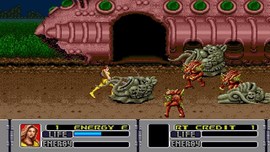 +/- Health can only be gained during rail shooter sequences, no 1-ups to collect, missing some parts of the arcade verison while adding others (adds a science lab with laser beam traps, maze map in final level; missing some animation, one rail section and one boss), all three characters play the same (except for the robot having somewhat longer range)

- Uneven difficulty (double boss in stage 3, easy autoscrolling levels), hard to crowd control (you mostly end up doing roll moves back and forth in the beat em up sections), some cheap hits in rail shooter sections (three melee enemies popping up at once), no grabs or throws, useless jump attack move, each individual part of the game is rather repetitive (except for the autoscrolling levels but there are only three, repeats first boss one time), a bit short (seven short stages), energy system isn't balanced too well (you use energy for the normal gun as well as smart bombs), somewhat sloppy hit detection (you need to stand some distance away from enemies to hit them, energy at the back edge of the screen can't be reached even though your sprite is touching it), very few level hazards (laser beam traps in lab, spiked traps in autoscrolling section but nothing else)