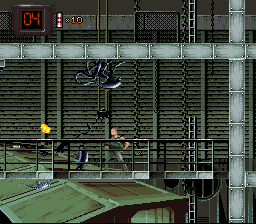 +/- Sound confirmation after completing a mission (annoying that the beep keeps going though), limited ammo and health combined with frequently respawning enemies (items also respawn as you beat missions though), password save, enemies in the hub area, no extra lives,

- Need to beat 8 missions before you can get a password, can't display the radar while attacking (hard to see in front of you in some areas (torch/flashlight effect) which is where it would've helped a lot - you can turn the effect off in emulation though), slow jumps, no mid-air control when falling, can't jump off of ladders (only fall), no reward or text confirmation for completing missions until you beat an entire area/stage, leaps of faith (can't look up/down), can't see your current health without getting hit (could've let you see it along with ammo supplies when pausing), detailed but slow mission briefings (can't speed up or skip text on a paragraph basis, somewhat slow cursor movement), some tedious elements (some waiting for moving platforms, backtracking (some mission areas are located past others from the hub area and you can't do several missions in a row (?), backtracking for health in the hub area), somewhat muffled and lo-fi audio overall, repetitive level design and background art, grenades disappear as soon as they move off screen,