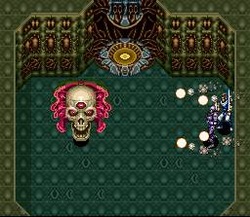 +/-
Linear structure
respawning enemies (spawn as soon as you scroll the screen away from them)
boss rush near the end,