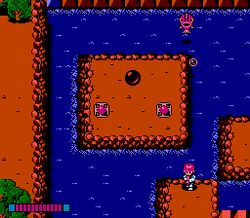 
+ Good art direction and use of colour, some good bosses, some good action/platforming puzzles, Zelda-like gameplay (Guardian Legend and Gremlins 2 more specifically), speed/jump length/armor/weapon/life upgrades (each weapon works pretty much the same though), fast paced with sometimes intense action, save feature (only saves at the start of a new stage though), pretty good jump controls (control length and height, shows your avatar's shadow - just a tad floaty), hidden items (you'll sometimes pick something up by accident without knowing what it was), smart bombs (needed for when you're overwhelmed), some large sprites, engrish intro text, diagonal movement and fire, not much flicker or slowdown, extra sound channels in the FDS boost the sound quality of the music

+/- No map (stages are pretty short and usually easy to navigate though), life tanks and speed upgrades are removed when entering a new stage (get to keep armor and weapon upgrades, full speed (which affects jump length) is sometimes required to finish a level), typical save the damsel story (nice ending cutscene though), respawning enemies (most respawn as you move one screen away from their spawning point), other enemies aren't affected by enemy bomb blasts, focuses on action rather than puzzle solving, loading times and disk swapping (not sure if they're long/numerous for a FDS game), the boss theme plays and a boss appears if you're on the same screen as its spawning point even if you can't fight it yet (due to walls/blocks being in the way) - makes the boss look a bit silly, it's possible to shoot through some walls (but only from the right for some reason, some enemies can shoot through any wall)

- Somewhat repetitive (no story progression, no overworld or shops, music sometimes repeats), trial & error (inconsistent knockback - your avatar is thrown backwards when shot from the back, can't jump over some projectiles, traps appearing almost right in front of you while you're moving), the pits (you're forced to play a short segment every time you fall down one and there's only a couple of different ones per stage, you also have to watch a small animation when falling and getting back up, somewhat lessening the blow is the fact that there are power ups in most of these underground areas), unavoidable hits (most of them can be avoided with smart bombs but then you need to have kept some and sometimes memorized what's coming, sometimes enemies appear on top of you as you're entering a new screen, sometimes there's a narrow path making dodging impossible), repeating bosses and enemies (there's usually three of the same kind of boss per stage, enemies start being sprite swapped after stage 3 or so which is better than palette swaps but still disappointing when you meet a presumed new enemy and it acts the same as a previous one), some tedious platforming segments (similar to Gremlins 2), no strafe or block move, some safe spots (stage 4 (?) boss - the dinosaur shooting diagonally, final boss when it's shooting)