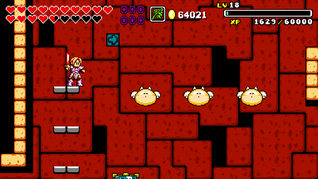 
*One of the woodpecker challenge rooms
**Final boss

​
​+
Wonder Boy/Monster World- and Zelda 2/3+LA-style gameplay and aesthetics (many enemies and the player avatar design, how the intro gameplay plays out, menu design, controls, mini-boss enemies, cloud walking / exp point leveling, downstab move (and upwards swing which is also a double jump), light and dark worlds, fortune teller handing out hints, NES-style audiovisuals, overworld and dungeons structure, HP and MP upgrade items, some references to Link's Awakening)
Very good mid-air controls
Good bosses overall (multiple patterns, well paced). Very good second to last boss and dragon boss
Some interesting abilities (hover jump and jump on water surfaces+swimming+AoE attack in one (bubble), fire ring - create portals to teleport between (can also be used as an attack but it's very situational)+fireballs, air ring - air dash which can be repeated and used to attack+dodge enemies with+dash if used on the ground - some fun challenges using this)
Some decent puzzles (platforming: breakable blocks - similar to Duck Tales 2 or Metroid, turn green orbs and certain enemies into temporary platforms with the first ability gained, fire dungeon; switches: timed switch puzzles, zelda 3-style switch puzzles where hitting the switch removes a certain set of blocks but adds another; cloud area tree sapling puzzle - connect "water and soil" to your spell elements)
Difficulty options (normal or hard, no easy mode)
Gain fast travel via teleporters after the second dungeon (teleport between visited save points, feather item east of atlant village)
New gear shows on your avatar (Monster World 1, Diablo, etc.)
Good visual variety for the enemies (some enemies behave too similarly though) and they tend to be very well drawn
Restore MP by hitting enemies with melee attacks (encourages aggressive play but having no MP regen by default can make certain puzzles a bit tedious (or it could've given you more MP to start with or to buy from shops) - can't buy MP potions)
Cutscene tutorials for new abilities (Wario Land 2?)
Some larger environmental changes (raising the water in dungeon 2)
Pretty fast leveling though staying in one place to grind is kinda slow. Can also buy exp later on however
Some shortcuts
Some optional challenges for extra hearts (woodpecker skill challenge mini-dungeon for example - get optional 3-hit stab combo)
Nice intro to the fire dungeon boss (the dragon)
Some new enemies appear around the world after a certain point near in the late mid-game/early end-game
Pretty nice ending (in-game cutscenes)
Pretty good economy throughout

+/-
Mostly linear structure (linear dungeon progression overall and the dungeons themselves are mostly linear as well, can leave the fire dungeon before finishing it and get the lyre in the ice area but it's rather tough without some level grinding, can get some items before a little bit before you're supposed to (masamune sword at the "the wall" area but it's kind of pointless since you go underwater and get the gear which is boosted when used underwater shortly afterwards), can upgrade the final gear before the air dungeon)
Pretty frequent save points which also heal you (one slot per game and three save slots - can't copy the file)
Checkpoints at the start of dungeons if you die at the bosses in them and select continue (herbs and potions are not restored however). However you can select quit instead and end up at the save point with your current progress saved (you only lose some exp points) - this didn't work well for me though due to the bug below
Can only carry one revival herb at a time (if you pick up another one then it's used automatically)
Enemies drop health though it's pretty rare. Can also buy one small OR one large healing potion OR one elixir (full heal)
Can't move while crouching
Silent protagonist (non-interactive dialogue)
Movement underwater is pretty much the same as on land
Can also find exp orbs in chests
Enemies respawn when re-entering the room/sub area
Some side quests but they're mostly minor (the monkey escort one isn't but it's not hard either) - required
Can't attack or otherwise get back your money from the stealing monkeys (they barely steal anything though and the animation is funny)
Buying herbs is pointless when you can just go back to bosco village for a free one
No interactive element to playing the lyre (makes the babel tower appear - similar to MW4)
The monkey thief quest is an interesting idea but it's easy and kinda slow (control the monkey to steal and use the guardian key)
One teleporter maze but it's pretty easy
Underused dark world areas in terms of puzzles (no traveling back and forth like in Zelda 3 or MP2 for example) and they're very short as well
While the visuals are more NES+ the music doesn't use any NES audio expansions

-
No area maps (just a vague top down world map and some signs showing basic directions at some points, some helpful directions from NPCs though)
Some control/interface issues (buggy hit detection in the last woodpecker challenge room where you down- and upstab to progress if you're slightly too late then you get hit even if a hit registers on the enemy+the upwards attack has a larger hit box than it looks like (plus it hits behind you! even if you use a sword without a beam attack attached to it it's easy to hit some enemies by mistake when you don't want to), PS3 controller doesn't work with the steam version without using joytokey instead, can't configure keyboard controls (!) - you get 3 pre-defined setups instead, can't bind inventory item usage to a button - have to go into the menu, kinda high default jump height (not much of a problem though?), pop-up text tutorial messages which are easy to accidentally close and you can't make them repeat, longer player knockback than in wonder boy while enemies don't get knocked back, money drops from enemies spread out - breaks flow a bit, can't see gear stats while shopping, can't look down (occasionally useful), shop items aren't explained in-game, no audio options, get hurt if your upwards mid-air attack doesn't kill the enemy in one hit - should've just knocked you back like the downstab, game is overly picky about portal placement at times - canceled if you try to shoot through a "turned off" color block, kinda slow menu transition (both when entering and exiting it), enemy drops can get stuck inside walls, stop dashing when moving between some screens, can't pause while being knocked back - the press doesn't register which can kill you at times if you needed to heal)
Some trial & error (elixirs replace big potions and big potions small potions, the lyre maker doesn't tell you which materials you need, can't just ask anyone about the second language in the game nor the librarian in town 2 about the stair that just broke - there's a puzzle here that kinda rips off Zelda 2, )
Uneven difficulty at times (easy early game besides the bosses up until the fire cave at which point enemies start doing almost 2x the damage even with the best armor at that point of the game and there are some tough timing/platforming puzzles, fairly easy babel tower dungeon and boss, easy aggelos test guardian boss (the falling one), pretty easy air dungeon boss if you upgraded the aggelos gear, easy dark world bosses)
No save points in dungeons - means you either have to backtrack to the one right outside of them or risk having to redo them if you die to the boss (could've been solved by letting certain enemies drop either herbs or potions at times like in the WB games or more frequent health drops from enemies or letting you carry one more herb or potion or lowering enemy damage a bit)
Enemy drops disappear after a few seconds
No shields and no dodge dash (+no knockback when hitting enemies) means you sometimes have to run away from enemy attacks which doesn't flow as well as in some other games - annoying against some enemies in the fire area and the ice area (lyre area)+the clouds in the cloud are though you can sometimes use spells
Some pointless one-way paths (before the first dungeon, above and to the west of the first town, cave near second town, etc)
Some tedious aspects (can't teleport out of dungeons, the laser shooting snake mini-bosses, the mini-boss enemies get spongy after a while (too many HPs considering their patterns), torches in the dark area don't stay lit, the spread shot attached to the water sword underwater doesn't replenish your MP - having to backtrack to restore MP for a puzzle is sometimes an issue (respawning and easy enemies in those rooms or a default MP regen would've solved this), the eel past the underwater swimming challenge should've been placed elsewhere so you don't end up having to redo the challenge because you didn't know that it wanted an item to give you the heart, one of the chests in the castle basement (dark area) isn't worth getting to, elixirs are too expensive considering you can only carry one, the air dungeon boss seems like just a battle of attrition - can avoid the attacks as you are not hit by their wings but it's very hard to keep track of everything going on, last phases of the final boss unless you take it really slow - chaotic and intense pattern)
Some NPCs talk like pieces of a walkthrough and a lot of them are completely motionless making them look like statues
Some spelling errors
Meh intro (text on a black screen while showing your in-game sprite standing still; unskippable but it's short)
Cliché story (damsel in distress, chosen one, good vs evil w/ a religious theme)
A bit annoying how the game tells you what to do after getting the language book
The water level aspect of dungeon 2 could've been more of a puzzle where you switch it back and forth
No dash until the late-game (post-air dungeon)
Unskippable credits and ending
Fewer special effects from specific gear and fewer gear options than in Wonder Boy 3
Some typos and grammar issues (near the beginning you're told you can fall faster with down+jump but it's really to keep falling through platforms that you can jump down through)
Somewhat bland dialogue overall though there are a couple of charming or funny moments (play the lyre in the tavern, monkey who starts stealing from you after helping it)
Some gold grinding for the lightning gear in the cloud area (unless you skip one of the heart containers earlier on)
Can't rest in your house
Most NPC dialogue doesn't update over the course of the game


Bugs:
-Near impossible to choose quit after dying due to a control bug that makes the selection default to continue - have to quickly press the button right after selecting quit (was the case even when using the keyboard)