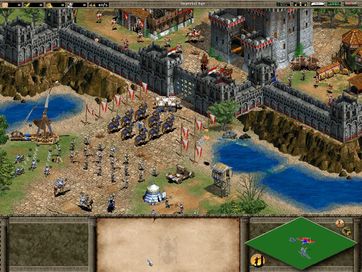 +/-
Triggering some events via a scout can turn out awkward or make you lose more units than expected
no "attack move" (patrol sort of works but isn't always reliable)
units' area of reaction to threats is pretty small (if one of your buildings near a unit is being pummeled there's no reacion if the enemy is a long ranged unit on the other side of the building from where your unit is)
no pre-mission choices in the campaign (deployment, units, upgrades etc. - see Heroes 3, Langrisser II)
AI is inhumanly (?) good at dancing ranged units in large numbers
no traps (perhaps planned but scrapped as they're mentioned in a document with the game on combat tactics history)

-
Can't waypoint workers to build then do something else (build then gather etc.)
pathfinding problems (troops don't move around larger obstacles, troops get stuck around ship transports)
somewhat grainy graphics
volume controls don't work properly (music is too loud) and some sfx are overly loud (troops attacked sound)
somewhat hard to keep track of what you have researched (several different buildings to check, researched upgrades disappear from the menu)
​the isometric perspective is slightly problematic in terms of getting a good overview in some situations as well as targeting/selecting things behind large buildings, Saladin stage 2 (annoying voice from allies keeps repeating when nothing is attacking them, need to kill even transports to win) and 5 problems (Orange sometimes doesn't build a Wonder), can be hard to keep track of triggered speech messages due to on screen action and loud sfx, some pathfinding/AI problems (when a unit is hindered by a river and a tower on the other side is attacking it, it doesn't move away, cavalry can get stuck in a few spots, paladins won't attack enemy musketeers when in defensive stance), mostly repetitive sfx, the storytelling in the campagin is a bit plain for its time (Warcraft II style) and romanticizes/bastardizes the history it's based on, the mini-map is somewhat less readable than other games of the time such as Starcraft and Heroes III (Stone/gray can be particularly difficult to see), enemy AI problems (patrolling AI not reacting to attack, AI not attacking gates (can be exploited in final Saladin mission), enemy villagers can be lured by building a tower near their town center, attacking an enemy villager building something makes the AI cancel the building - wasting resources, no boar hunting by AIs, etc), no hotkey for going straight to the action when the under attack horn sounds?