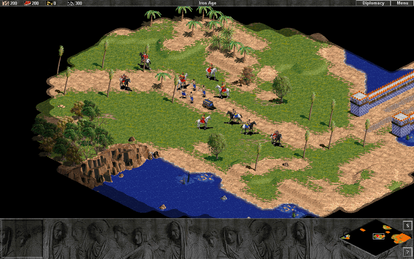 +
Improved pathfinding (still not great unless you spam click destinations and villagers or trading boats can get stuck on each other for up to 1-2 seconds when crossing paths, units also tend to freeze up trying to enter transport ships)
idle military and villager hotkeys (comma and period)
cycle through (select and view) specific building types (new types added with the patch)
unit control groups (alt+# to select and view, 10 more slots with the patch – on the numpad)
HD resolution (1920x1080)
new gameplay options (random teams and map type, post-iron age), RMB fix when moving the pointer around quickly, enemy AI bug fixes, two new random map types (oasis and rivers), corrected civilization bonuses descriptions and rebalanced bonuses, rebalanced units and upgrades, option to show Player Scores and/or Time and Population automatically on game start, building queues (shift + left click after selecting what to build) and unit queues (can’t queue up different kinds of units or upgrades though), waypoints (shift + right click while moving then right click at the final destination), allied CPU players no longer change diplomacy from accidental hits by for example catapults, mod manager, scenario editor (new editor options w/ the patch), file checker (checks for errors with the installation), windows 10 compatibility, various bug fixes, 400 population in multiplayer (huge battles), speed options (only three), view selected unit (space) or town center (h), diplomacy and MP chat hotkeys (f9, f8), prey animals and berry bushes now visible on mini-map and mini-map colors easier to see, fish food stocks now proportional to fish size, smaller trample damage area of War/Armored Elephant and Scythe Chariot (could hit units through walls), improved distribution of randomly generated terrain objects, improved in-game text messages/descriptions, minor terrain effects (ranged units do more damage from high to low ground), historical theme (more serious tone than in the sequel but pretty barebones text in between missions), diplomacy (barely used in the campaign unfortunately – only in one yamato mission do you need to pay tribute and only in one other do you fight alongside a CPU player), 10 campaigns total (one of which is only 3 missions long and another 5 missions long though (punic wars and hittites – RoR and AoE trial version campaigns respectively)), online multiplayer, pretty good intro and outro cutscenes (not many in-between), trade resources with other players (via the docks – can only trade food/wood/stone for gold though (not gold for the others or for example wood for stone), can also send resources via the market though there’s a penalty (representing corruption, tariffs, bandit raids) – in some missions you pay tribute to stay allied with CPU players (can’t do the same towards them though?) or to help allies out), hunting and fishing (food resource), nice animation overall, voice taunts in MP, select all units of one type on screen by double clicking on one of them, civilizations spanning stone age to iron age tech plus the Roman empire (and Palmyrans, Macedonians and Carthaginians) in Rise of Rome, 16 civilizations (12+4), can attack ships in melee from land if they’re close enough to the shore (you can also fish from land), can quickly destroy your own units and buildings (delete), speed up building by using more villagers,  can repair ships (can’t repair catapults or ballistae but they can be healed), some fun cheat codes (laser and nuke soldiers, bazooka car, lightning priest, tree archer, people launching catapult, tricycle baby, turn birds into dragons, control animals only), some missions have alternate solutions (both alternate victory conditions and how you reach them), select up to 20 units at once (enough for the campaign but not MP), destroy trees using upgraded siege weapons (fire),

+/-
Can’t issue commands while the game is paused
more gold and less stone for the “high” starting resources option
enemy AI has more resources on “hard” (500) but less on “hardest” (1500)
chariots now have double attack vs. priests
slower fishermen gathering rate (was much faster than others)
​bonus attack of villagers against walls and towers now reduced (previously they were stronger vs walls/towers than fully upgraded centurion), food stocks never replenish?, can’t make villagers hide in the town center (town bell), can’t pause a unit or upgrade in process – only cancel it, pretty big leaps in tech tree advancements after a few Egyptian missions, can’t upgrade some low level units like axemen and archers, very short sight range for many units, can see prey animals through the fog of war, only 5 wonders shared between the 16 civilizations (each is shared by 3 civs except the colloseum which is shared byn 4), CD audio OST (mp3s; original had midi tracks when played without the CD and some were pretty different), no wooden walls, can’t sell or disassemble buildings or units, wonders only give you a score bonus unless the mission objective is to build one (or build and defend one for a set time; they could’ve given bonuses or allowed for unique units to be built), no hotkey for centering on the most recent attack, healing is pretty micro-intensive and becomes situational in MP, your units have a pretty small detection range,

​-
No automatic farm reseeding (they have better upgrades and are faster to build now though) and the ground part blocks units
no formations
no rally points (selecting where a built unit goes to)
no attack area or patrol moves
can’t see player color in the diplomacy menu
​no narrator between missions, linear mission structure (can’t choose which territory to invade or affect history through the campaign with alternate solutions or outcomes in the missions), the story isn’t character driven at all (units don’t talk during missions like in WC2 BtDP/SC/Aoe 2), no female villagers, sometimes odd keys used for hotkeys (C for villager, T for axeman, etc.), no “scatter” command, only 50 population in campaign missions, some trial & error (some cheap level design in the campaigns – for example the canaan battle Egyptian mission, multiple farmers on one farm don’t harvest faster, ruins can be captured despite there being watch towers near them), sometimes uneven difficulty (missions are generally too easy after an initial hurdle, Greece 6-7 are too easy while Greece 8 is pretty tough, Babylon 5 and Yamato 4 are very tough and tedious, Yamato 7 and 8 are pretty easy), the enemy never surrenders or asks to become allies in death match style missions, ships forget an attack order if the target moves out of sight while they’re moving towards it, the civilizations are too similar and their campaigns lack unique music tracks,

Notes:
-All patch changes: http://upatch-hd.weebly.com/features.html
-Most hotkeys: http://aoe.heavengames.com/academy/hotkeysandcommands/shortcuts.shtml
Bugs:
-No need to build a temple directly on the ruins of the enemy temple in the fourth Yamato mission (can be placed anywhere?)