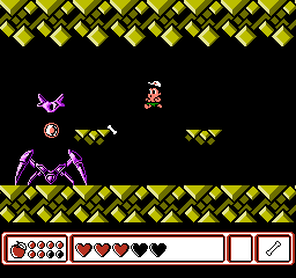 
​
​
​+
Teleport back to one spot at a time by placing a certain egg at Pteranodon icons (would've been more useful if you could place eggs at each and choose between them to go further back, can't remove an egg once it's been placed; you also get teleported back to your home after each main boss fight though and you can win a "teleport to home" item in some mini-games if you replay them though they're kinda tricky to win and you have to button mash)
Dinosaur/animal rides return (reddish purple one lets you move in lava, purple pteranodon lets you fly, sea animal lets you swim a bit faster (not that useful), triceratops lets you do roll and jump attacks (similar to Sonic) and avoid sinking in quicksand; these can be put away in the inventory like in Alex Kidd in the Enchanted Castle) - they die in one hit though but can be picked up over and over back at their hut
Mini-bosses
Some good bosses (volcano boss - multiple phases, crystal crab, pyramid ghost)
Some cool items (ice board - skate on ice, the spear lets you hold onto the floating logs from below, water gun lets you revive plants to use as springs)
Get progression tips from the pteranodon near your house
Push and carry+throw certain blocks (Sonic 1/SMB3) - can even ride the skateboard while doing it here
Some decent platforming puzzles
Dark rooms which you can light up with the torch (Zelda 3; for some reason the torches in the pyramid don't have an effect on a room's brightness though)
Temporary invincibility power ups (pretty rare enemy drop)
After beating a boss you get a new item and a short tutorial level to use it in, upstab (Zelda II or Rastan) but no downstab, can carry a small potion (heart) and a large one (full health refill),

+/-
Mostly linear structure
Can't turn around while crawling
Password save (fairly short)
Rest at home
The map screen (displayed by using the compass) is a bit vague and detached from the in-game topography (shows a tilted view schematic of the sub area)
Vague default map screen (overhead view of the world which doesn't show your location or any points of interest)
Usually no item explanations in-game (they tend to be self-explanatory though)
Level design gets more linear as you reach the second half of an area (the pyramid is an exception) and then fully linear with a music change right before the boss (Wonder Boy 1 style)
Some weapons are only used once or twice to progress/get to a new room (the hammers)
Rips off the pipes and slopes from SMB and the fairy (life refill upon death) from Zelda - however the latter also resets a boss fight if used at one
A few mini-games (button mashing race, whack a mole), can't access the menu during invincibility, enemies respawn as soon as you move away from their spawning point, while there are some placed smart bombs in the world that you can carry for a bit you can't carry them with you for later use making them not particularly useful, it's better to use the pteranodon than the sea animal when going to the pyramid (it lets you bypass some puzzles), would've been nice to be able to upgrade an animal's HP - the meat (which gives full health here) could've been used for this purpose or they could've re-used the hunger mechanic for this purpose so you had to keep feeding them while they're active, can farm for health before each boss, the game doesn't really test your abilites to use the items in most areas,

-
Can't use two items at once (to use a ranged attack while ice boarding or a weapon while having the umbrella equipped for example)
Fairly easy final dungeon and boss
Constant beeping when at low health
Some trial & error (racing mini-game controls, some one way shortcuts, first animal (purple) disappears if you go underwater)
Some detours just lead to a life refill
Can't talk to your wife/gf
It's often hard to grab enemy drops in mid-air or in water (they'll fall off screen in water as well)
You barely get to use the surfboard and regular skateboard here
No difficulty options or second quest
No fully spring-based platforming segments or mini-games
Missing a couple of enemy types and hazards seen in the prequels


Notes:
-The game seems to detect if you use turbo in the mini-games and makes the one you used it in not work at all the next time you try it 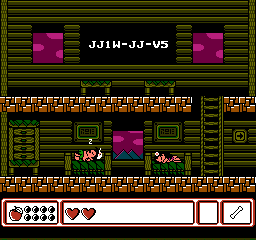 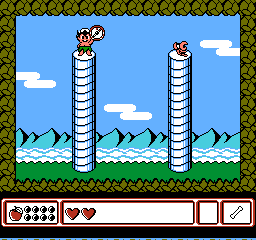 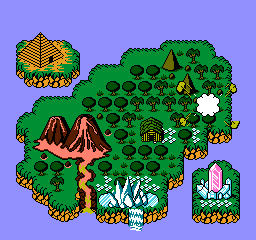 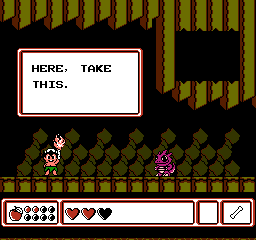 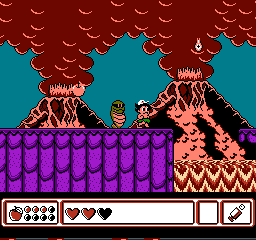 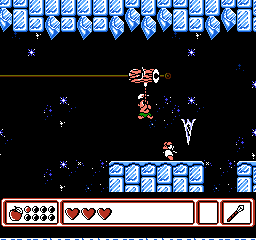 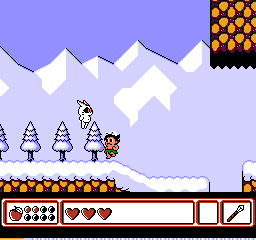 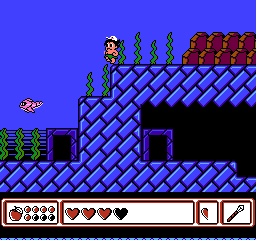 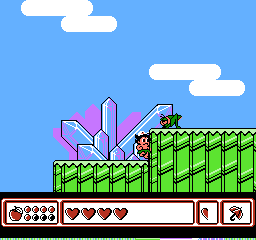 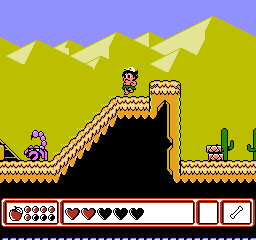 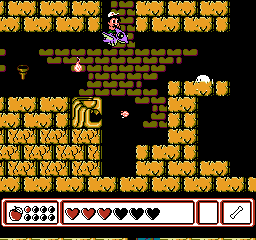 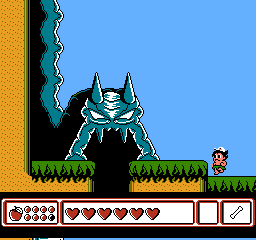