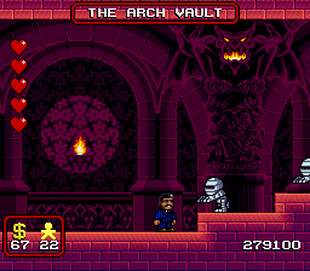 + Best scrolling/detail/overall sound compared to other versions, somewhat metroid-like gameplay (interconnected world, several paths to choose from early on), lots of hidden items and paths, upgradeable lifebar (need to beat certain bosses (big bird, snowman, centipede) for each heart/hit point though and it can take a while to find the right ones (the bird is very close to the beginning though), can only get four hearts?), some fun gadgets like the flight helmet/fez (on a time limit though), hands out some clues to hidden paths via the thing (the hand pet), password save after bosses (short), title cards for each area, fairly frequent checkpoints (at the beginning and sometimes middle of sub areas), temporary invincibility power ups, pretty good switch puzzles in some areas (the stove), doors leading back to near the beginning after bosses in remote locations (not the case after the crypt (goblin) or centipede bosses though), some nice backgrounds (some others are too saturated/busy/high contrast), some good bosses (snowman, witch), the "behind the scenes" segment (similar to the parallel world in SMB2), very little slowdown despite having a lot of sprites in some rooms,

+/- Minor censorship (poop), can't move while ducking, no run/slide/dodge moves, can't jump down through platforms you can jump up through (tedious in some rooms), a bit odd how you can hold down the attack button to hold out the sword and it still damages enemies (the sfx also keeps playing over and over which gives an unfinished impression, good that you can hold the button and switch between forward and upward attack though), no overall time limit, some projectiles can be blocked and jumped on, can't throw the balls upwards, throwing in mid-air makes Gomez stop in mid-air, can't teleport out of the long areas leading to a boss (until beating it) or between visited areas, no permanent abilites or items gained from beating bosses that you can use to access new areas elsewhere, sub areas leading up to bosses are linear and straightforward, can't look up/down (not really needed for the most part), collecting money replenishes health (every 30th $ or so?) and lives at every 100$ - can't choose to save the HP for later unfortunately, speed shoes (can be fun but makes Gomez even more slippery, doesn't feel particularly Addams Family-like), fairly easy to rack up extra lives (needed since you're so fragile and other reasons stated below), lifts several ideas from Mario, you can farm for items in some places where they're easily accessible near the entrance to the area

- No map feature, somewhat lacking jump height control (fairly easy to jump higher than wanted), somewhat unforgiving hit detection overall (annoying when trying to jump on enemies, sometimes very forgiving when jumping on enemies above you though), only two HP to begin with, continuing is pointless since you start from the beginning?, missing the second intro of the MD version, somewhat floaty movement (similar to SMB1-3 but worse since you slide the same amount just from taking short steps forward), trial & error (some projectiles from off screen, snowballs can't be bounced on, finding some hidden doors and paths, fast enemy flyer attacks, cheap enemy placements here and there), the flight fez disappears quickly if you move to a different area, can't attack diagonally (swinging from forward to up doesn't work), lose your weapon or power up (except for the flight hat after taking just one hit (they're not that common either, at least they count as an extra hit point), enemies don't drop anything, can't save items and weapons for later use (no item inventory), some unfitting backgrounds (hidden rooms near the main hall of the house), uneven difficulty (spikes: the stove area (insanely long, plenty of waiting for traps and platforms, repeats some rooms, no weapons to use for the boss), tedious slippery ice + spike ceiling segment, the centipede boss; dips at the bird boss), somewhat hard to jump out of a tight space and onto the platform above without hitting your head, no sfx when killing enemeis with the sword, ugly final boss, kind of repetitive (not enough new abilites or upgrades, few bosses, mostly horizontally scrolling areas that don't flow as well as Mario or Sonic, new segments tend to drag on, lacks puzzles overall; might've been a good idea to have a weapon or item to deal with the stove area enemies and traps (could've at least put a hidden invincibility power up or two there)), somewhat generic looking sprites overall and Gomez looks kind of odd, some unavoidable damage?, annoying sfx when you get hurt (honk!), can't play as or talk to the people you've rescued, so-so dialogue overall, the game is missing most of the humour of the show and movie, lame death animations (looks and sounds like you're popping bubbles), no sfx when bouncing on uncle fester's head, the tip to wednesday's location is the same after rescuing her, tedious labyrinth near the finale, several enemies are sprite swaps of earlier enemies, no difficulty options,