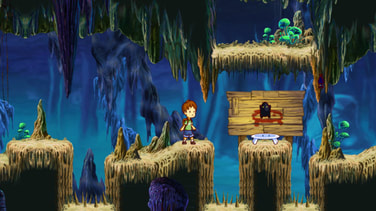 
+ Pretty unique mechanics (transform a blob mascot into tools using various magic beans - collect new beans over the course of the game), unlock bonus levels by collecting off the path/hidden chests in the main levels (these play pretty much the same) and unlock artwork by beating the bonus levels, frequent checkpoints, auto-saves after each beaten level, good art direction and animation, control config (doesn't support controllers though - need to use joytokey or similar), Yoshi's Island-like throwing controls, can switch the camera to center on the blob at any point, more blob abilites than in the NES game and each one is explained in the inventory menu (which is also faster than on NES), can look up/down, faster and smarter blob movement, some interesting new abilites (cannon, large hamsterball that encapsulates the boy, rideable rocket, boy clone, bowling ball, shield - reverts projectiles), pretty good puzzles overall, nice intro cutscene, 80 levels (40+40), faster loading on PC,

+/- No 2-player co-op?, can't control the blob manually, can't make the blob go grab a chest on its own, no run or dodge moves, no difficulty options, can turn off sfx but not the voice separately, no timer, the boy can't directly defend himself against enemies, can't make the ladder go down through a platform (need to use the hole blob), unlimited bean ammo, no shop system, linear structure with a level select map accessed from a hub room (a treehouse) - original was more of a platform adventure, no catch-up bean? (teleported the blob to you in the NES game; seems like the balloon is the replacement), can't throw a bean towards the blob as it moves towards a direction you told it to or make it catch a bean in the air like a dog (as seen in the intro cutscene) - could've made for better flow and some interesting momentum-based puzzles, hug and/or scold the blob (only effect is that scolding makes the blob stay in place), can't make the blob change direction in cannon form?,

- Control issues (can't call the blob while walking, the boy tends to turn around when you start to aim your bean throw, can't move while aiming a throw, the blob's pathfinding sometimes gets buggy, stun animation from falling, would've been better if the default action for the blob was to follow the boy after having used it to get somewhere and you could switch this behavior to make it stay in place with a button press, need to tap the up button to grab onto ladders in mid-air - holding up doesn't work), the boy usually sounds annoyed when calling the blob (doesn't fit the mood), slow paced (waiting for the blob, slow block pushing, die from falling too far - over a screen's length), die in one hit, somewhat unsatisfying feedback from getting hit by enemies, the backgrounds tend to have a somewhat unfinished look to them compared to the sprites, the game auto-picks the beans you can use for each level (would've been more fun to have access to all the ones you've collected and the levels having more alternate solutions), trial & error (the hole ability (main weapon against standard enemies) doesn't work in some places, boss patterns, small pushable rocks can kill you), the camera ocasionally doesn't center on the boy, odd pushable rock physics, too many signs showing how to beat puzzles?