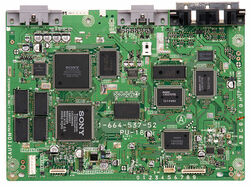 This sound processing unit is called CDX2938Q according to a coder I've talked to and some obscure google search results I've found.

There are 2523+ PS1 games. PSF (Playstation Sound Format/Portable Sound Format) means the game uses sequenced music generated in real-time by the chip, as opposed to streaming audio (generally in .xa format) where the chip plays back a longer recording in mono or stereo, or redbook audio (cd audio) which doesn't use the chip. 1-2 SPU channels can also be used for audio streaming, in mono or stereo respectively. Click the image for a link to the wikipedia page on the PS1's tech specs. More info on the sound chip can also be found here.

The above source claims that there is FM synth support in this chip however it seems to be referring to the pitch modulation mentioned on wikipedia, which I assume can be used in the same way as on SNES. This was used for various sfx by Square for example (the explosion in the clip, and also the encounter sfx), and probably in some music though I've yet to find any examples.

The chip has fewer hardware effects than the one in the Saturn, as well as fewer channels (audio RAM is the same), but it does have hardware sample compression and streaming (.xa format).